BC's natural wonders will take your breath away

The Coast Mountains are a major mountain range in the Pacific Coast Ranges of western North America, extending from southwestern Yukon through the Alaska Panhandle and virtually all of the Coast of British Columbia south to the Fraser River. The mountain range’s name derives from its proximity to the sea coast, and it is often referred to as the Coast Range. For most of their length they rise abruptly above a coastal strip, facing the Pacific Ocean with rugged slopes and tremendous relief, most extreme where glacial action cuts fjords up to 192 km long (one of only four such occurrences in the world). Some glaciers remain, notably around Mt Waddington, highest point in the chain, and in the Boundary Ranges, north of the Nass River. Most of the Coast Mountains are granitic; ice age volcanic action created the hollow cinder cone of Black Tusk and other features in Garibaldi Provincial Park.

Located at the northern tip of a glacially etched fjord on the Pacific Ocean, surrounded by a spectacular mountain backdrop and nestled within a temperate rainforest, Squamish is recognized worldwide for its culture, recreation and incredible mountain lifestyle.

Squamish is ideally situated on the scenic Sea to Sky Highway between the two host venues of the 2010 Olympic Winter Games: Vancouver, British Columbia’s largest city and Whistler, a four-season mountain resort consistently ranked the number one ski resort in North America.

You can explore Squamish here.

Executive Suites Hotel & Resort, Squamish, a spacious all-season and all-suite Squamish BC resort hotel, is centrally located just 40 minutes from Vancouver and Whistler Village along the scenic Sea to Sky Highway. Squamish is home to some of Canada’s most spectacular backcountry and park land, and with virtually unlimited recreational activities, is a truly special destination. More details and discounts will be posted in the Newsletter.

Squamish has a moderate coastal climate with average summer highs of 24C and winter lows of 3C. Rainfall averages are 213cm per annum and snowfall 235cm. You will never be too cold or too hot in Squamish – just like Goldilocks, the temperature in Squamish is just right. Some say Squamish experiences a lot of rain, which is true in the months of November through to January, however, this rain is snow at higher elevations which is a good thing for many!

Summer’s in Squamish are sunny, warm, green and absolutely pristine. The Squamish Climate is perfect for those seeking an outdoor lifestyle or, perhaps, those taking on an expedition adventure race.

Like any other high mountain area, the weather can be changeable, colder at altitude, so your pre race preparation should factor in all conditions. Cold temperatures, snow, strong winds and heavy rain can occur at any time of the year. Just remember that it can be very sunny and warm too!

The world's most epic outdoor adventures - from sea to sky - all within 10 minutes of one another! 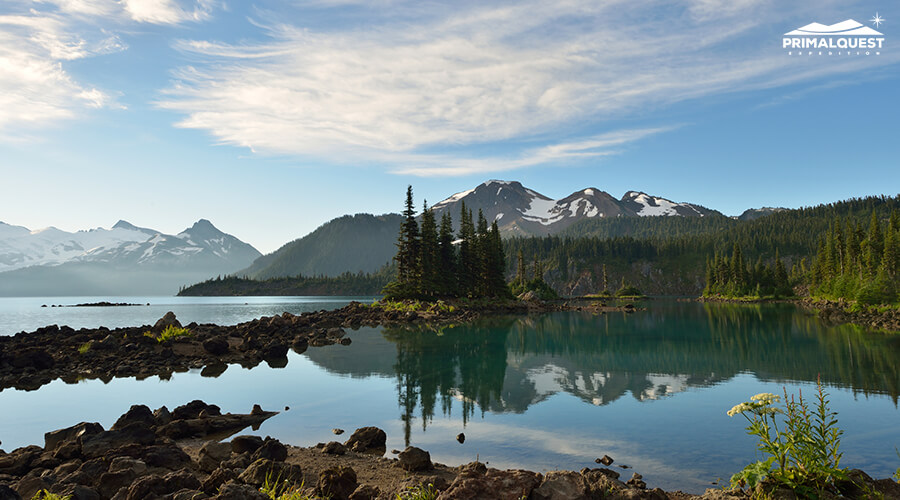